Book Review: The Captive’s Quest for Freedom: Fugitive Slaves, the 1850 Fugitive Slave Law, and the Politics of Slavery by RJM Blackett 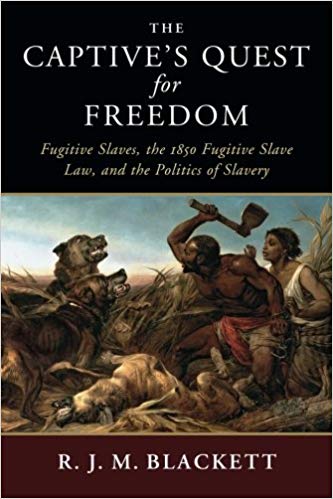 In September 1850, newspapers across the United States rejoiced that a compromise had been reached in Congress. A salute of a hundred guns was fired “as a testimonial of joy” in Boston on behalf of citizens of both parties.[1] The Compromise of 1850 was a series of measures that looked to balance the interests of the slave and free states in the expanding republic. California was admitted to the Union as a Free State and the slave trade was banned in the District of Columbia. Utah and New Mexico were given the right to decide whether to allow slavery in their territories, which ensured their status as slave states, and the Fugitive Slave Law required citizens of free states to cooperate in the return of escaped slaves. Not only was it widely popular at the time but historians have also accepted these decisions together as staving off sectional crisis. David M. Potter calls the compromise the “armistice of 1850”.[2] Richard Blackett is not so convinced. In his new book The Captive’s Quest for Freedom, he isolates the Fugitive Slave Law as not merely a prerequisite for Southern agreement to the compromise but one of the most crucial political and legislative decisions in US history. The Fugitive Slave Law nationalized the recapture of escaped slaves and clearly implicated Northerners in the institution of slavery. He shows how the law politicized the escape of enslaved people to the North.

The Captive’s Quest is about two things; bad law, and resistance to it. Blackett details both masterfully, showing how the legal story is distinct from, but impacts the personal. This is reflected in the two parts of the book; the first sets up the introduction of a disruptive law, and the political and intellectual world of the North that it entered. The first two chapters narrate the passage of the law and the first year of its existence. The law required that citizens of Free States assist in the recapture of slaves if required to do so by federal marshals, and so were “instantly transformed into slave catchers” (p.xiii). Blackett is emphatic that the law was “an inadequate mechanism” and this inadequacy “undermined the political calculus at the heart of the law” (p.459).

The second half of the book looks beyond the law to the people it was trying to control, uncovering hundreds of stories of enslaved people fleeing across the border. Blackett emphasizes that black action was at the heart of resistance to the act. Quoting C L. R. James, he recognises enslaved “self-expressive presence” without which it is “impossible to imagine a movement capable of such a sustained assault against slavery” (p.xiv). Recognizing the role of the enslaved and the free black communities who assisted them helps update the near-mythic notion of the Underground Railroad as an infrastructure which enabled freedom. Over a century ago William H. Siebert imagined the Underground Railroad to be something close to an actual railroad, with “stations” and “conductors.”[3] This remains the idea of fugitivity in the popular imagination; the well-worn routes and safe houses of the traditional story which conjures up a sort of procedural regularity in fleeing the South. But in The Captive’s Quest the Fugitive Slave Law is a more real and destabilising infrastructure than the allegorical train, and Blackett shows how contingent and individual stories of slave fugitivity were.

Blackett’s book is a much-needed account of the sheer scope and variety of black resistance to the law in the North and South. It was African American communities in the border states who worked as a fifth column against slavery, such as those in Gallatin County on the Ohio River that were “a thorn in the side” of both Northerners working to expel them from the county, and slaveholders across the river who saw them as drawing enslaved people (p.152). Decentring the Underground Railroad helps Blackett to emphasize that even when reaching the North, black life there was precarious and deeply political. Even in “their determination to stay put and resist the law” through which they “asserted their sense of belonging” black Northerners were being subversive (p.20). Blackett highlights the threat of kidnapping of free blacks as a “constant danger” in Ohio, Missouri, Illinois and other parts of the North, and that this danger “emanated largely from organized groups of whites” who were almost never prosecuted for wrongful seizure (p.177, pp.240-1). Black Northerners were fighting for the security of their freedom in the North and led the disruption of the law.

We are once again living in a moment of heightened political polarization in which questions of migration and citizenship play out across our borders, newspapers and courts. It is fitting then that the publication of The Captive’s Quest was followed months later by another significant study of antebellum slave fugitivity; Andrew Delbanco’s The War Before the War: Fugitive Slaves and the Struggle for America’s Soul from the Revolution to The Civil War. Both cast a cold light on the Fugitive Slave Law and its effects to emphasize that the implementation of morally reprehensible laws implicate all citizens, not just those it targets. A shining example of social history, The Captive’s Quest restores the experience of fugitive slaves to the study of antebellum fugitivity and the Fugitive Slave Act. Above all, this is a book of meticulous research which uncovers the individual stories of fugitive slaves escaping the South and recognises the actions of black communities both sides of the border as the radical opposition to the act.

Book Review: Downwardly Mobile: The Changing Fortunes of American Realism by Andrew Lawson
What We Learned: Organiser's report on the 1st Americas Postgraduate Conference at the UCL Institute...
Must-Hear Podcasts: A List for Students and Scholars of American Studies
Book Review: Kennedy: A Cultural History of an American Icon by Mark White
Event Review: The Maple Leaf and Eagle Conference 2022
Book Review: An American Genocide by Benjamin Madley
Book Review: American Unexceptionalism - The Everyman and the Suburban Novel after 9/11 by Kathy Kna...
Book Review: The Age of Hiroshima edited by Michael D. Gordin and G. John Ikenberry

Kate Birkbeck is a first year PhD student in History at Yale University. She has also received degrees from University College London and the University of Cambridge. Her interests are in state violence in the nineteenth century United States. Her research has been generously supported by the Beinecke Rare Book & Manuscript Library, the Nathan Hale Associates Program, and the Isaac Newton Trust, among others.
View all posts by Kate Birkbeck →
Tagged  African American History, Black History, C19, Civil War, History, Legal History, Slavery.
Bookmark the permalink.