This is the ninth post in a special series exploring and discussing artefacts from a selection of Adam Matthew Digital collections. This article uses primary sources from the ‘Meiji Japan’ collection, which can be accessed here.

From 1633 until 1853, the military governments of Japan enforced a policy of sakoku or ‘closed country’ which prevented foreigners from entering Japan on penalty of death, and prohibited Japanese citizens from leaving. This isolationist period was brought to an abrupt end in July 1853 when American Commodore Matthew Perry steamed four warships into Tokyo bay and threatened to open fire unless the Japanese agreed to enter into trade negotiations. This was a time of American expansion into the Pacific based on the Monroe Doctrine, with the tactic of gunboat diplomacy used to enforce American imperialism. Japan, and more importantly its neighbour China, were seen as key markets for American goods. Outclassed by American military power, the Japanese had no choice but to agree to American treaties, bringing to an end the isolationist policy. The threat of American attack and the sudden influx of foreign traders caused chaos for the Japanese military leadership, resulting in the collapse of the Shogunate government and the restoration of political power to the Emperor. For Emperor Meiji, the grandfather of Hirohito, the adoption of Western political structures and technology was seen as the key to transforming Japan into an international power. 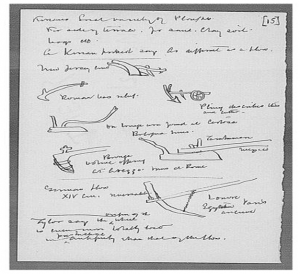 The late 19th century was a period of immense social, economic and political change in Japan, known as the Meiji Restoration. It was into this time of turmoil and opportunity that American zoologist Edward Sylvester Morse (1838 – 1925) visited Japan for the first time in 1877 to study coastal brachiopods. Morse was a successful zoologist, specialising in the study of molluscs, who became the first professor of zoology at Tokyo Imperial University. He had a keen eye for observation and was talented in making detailed sketches which accompanied his academic work. Despite his extensive work as a zoologist, Morse is perhaps best known for the publication of Japanese Homes and their Surroundings in 1886. Morse was supposedly inspired to write Japanese Homes during his third visit to Japan, when his friend Dr William Bigelow advised him to stop “frittering away your valuable time on the lower forms of animal life… for the next generation, the Japanese we knew will be as extinct as Belemnites” (Morse, 1886/1961, p.vii).

Whether or not this story is true, it was certainly fortuitous that Morse turned his attention to Japanese architecture and ethnography, as Japanese Homes became the foremost reference on Japanese culture and building techniques of the time. In the book, Morse’s meticulous sketches are accompanied by his comprehensive text to give the reader a detailed insight into Japanese culture and life of the era. Morse’s interest in the innovative Japanese building techniques shone through, as he identified the major differences between Western and Japanese architecture. The work provides a wealth of information concerning Japanese construction techniques, as well as detailing the intricacies of Japanese home interiors and gardens. Morse was clearly favourable to the Japanese, noting that “other writers speak of the want of privacy in Japanese dwellings, forgetting that privacy is only necessary in the midst of vulgar and impertinent people, a class of which Japan has the minimum” (Morse, 1886/1961, p.12). 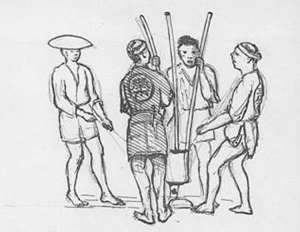 The Adam Matthew Collection on Meiji Japan includes Morse’s diaries, many of his intricate sketches of buildings and tools from Japanese Homes, his correspondence with Western and Japanese contemporaries, as well as his many lecture notes. Of particular interest are Morse’s sketches of agricultural tools, which highlight the skill of traditional Japanese farm workers. The end of the ‘closed country’ policy led to many Japanese migrating in search of a better life, especially to Hawaii and the West Coast of the United States, where they became farmers. Japanese immigration was a cause of contention, particularly in California, where fears of the Yellow Peril became widespread. In contrast to the negative portrayal of the Japanese in the sensationalist American media of the time, known as the yellow press, Morse’s sketches and writings depict the skill and refinement of traditional Japanese technology and culture. Morse’s records remain an important resource today, preserving a pivotal moment in Japanese history and allowing the reader a glimpse into Japanese lifestyles at a time when Japan was modernising and becoming an international power. His highly detailed observations and refreshing attitude provide a unique outsider’s perspective of Japan at the end of the 19th century. Thus, Morse is rightly remembered for his work in aiding the understanding of a foreign culture to Western audiences. During his time in Japan, Morse also amassed a great collection of Japanese pottery, which is now on display at the Boston Museum of Fine Arts and the Peabody Essex Museum in Salem.

Book Review: West of the American Revolution: An Uncommon History of 1776 by Claudio Saunt
Black History Month Post: ‘All Englishmen Were Not Shakespeares’: William Craft’s Attack on Scienti...
'Is It Because I’m Black?': The Music Industry, Image, and Politics in the Careers of Syl and Syleen...
(Re)Constructing the Past in George Saunders’ “CivilWarLand in Bad Decline”
Our Latest Longest War: Losing Hearts and Minds in Afghanistan
American Studies in Europe: Interview with Cristina Cheveresan, West University of Timisoara, Romani...
Peace and the Palestinians: Parliamentary Association for Euro-Arab Co-operation
A Woman’s Place is in the Resistance