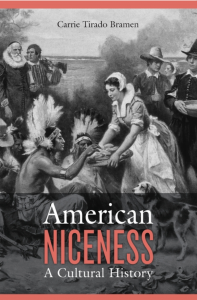 When the current U.S. president, as Bramen puts it in her wide-ranging cultural study, ‘epitomizes the bombastic chauvinism of the Ugly American’ (1), the concept of American niceness sounds at best like an out-dated but innocuous cliché and, at worst, like a dangerous fiction. As American Niceness sets out to prove, the trope of the kind and generous American has yet to fall out of fashion and the role that it has played in disguising a long history of ugly violence might account for its unstinting survival.

Moving from the country’s foundational narratives to its twentieth-century imperial ventures, Bramen attends to a range of literary texts in order to gage the evolution and multiaccentuality of niceness within American culture. She anatomises popular accounts of generosity, such as the trite parable of the nice Southern slaveholder and the happy slave, as well as under-read myths and narratives. Throughout, she exposes niceness as a rhetoric that, from the nation’s inception and all the way to its fraught political present, has allowed America to displace culpability, disavow an unexpiated history of violence and compensate for racial and class inequalities.

These strategies are delineated in the book’s first chapter, an analysis of the original encounter between the Indians and the Pilgrims at Plymouth Rock, and reprised in Bramen’s final chapter on America’s turn-of-the-century imperial frontiers. Both sections evidence the performance of niceness as a linchpin within America’s web of relations with the foreign Other, a reiterated narrative that endlessly concealed the actual violence driving America’s politics at home and abroad. However, Bramen also details how the discourse of niceness found its way into the works of writers and activists, such as Helen Hunt Jackson and Zitkala-Sa, who worked to unveil the true dynamics of the country’s foundational narratives. Their work countered the trope of the savage Indian through the recovery of stories and anecdotes that emphasised the hospitality of Native Americans upon encountering the settlers.

Bramen’s chapter on black amiability, which includes readings of Edgar Allan Poe’s The Narrative of Arthur Gordon Pym (1838) and Herman Melville’s Benito Cereno (1855), pursues this consideration of niceness as a multivalent narrative. If the typification of the slave as innately kind and generous facilitated the Southern slaveholder’s paternalistic reading of the black body, Bramen adroitly illustrates that such racial stereotypes could be subversively appropriated by slaves themselves, turning black kindness into ‘a form of social camouflage’ (136). As Poe and Melville’s narratives suggest, black amiability could be feigned as a means of deception, particularly in the years of the Civil War, aiding the cause of the Union in the South and simultaneously complicating the hermeneutics of the once legible black smile.

Bramen’s cultural history ambitiously proposes to account for a long stretch of time and an equally vast pool of literary sources, but the risk of spreading oneself too thin is dodged by firmly anchoring the study to a number of key figures, characters and authors whose words and works ground this extensive historical survey. The writings of Harriet Beecher Stowe, in particular, buttress and inform Bramen’s discussions at length, offering key interventions within debates ranging from Southern and black amiability to Christian generosity and feminine niceness.

Bramen’s appraisal of feminine niceness is one of her most interesting and valuable contributions to a cultural study of the American nineteenth century. Once again, a consideration of Harriet Beecher Stowe’s writings drives the trajectory of this chapter, aligning their unstable stance on the performance of feminine amiability with Louisa May Alcott’s equally strained position in Little Women (1869). We can situate Bramen’s appraisal of Alcott’s novel within a solidly established critical tradition inaugurated by Elaine Showalter in Alternative Alcott (1988). As suggested by Showalter and others, Alcott was generally caught between a devotion to middle-class propriety and a profound disappointment with its limitations, an ambiguous attitude that Bramen detects in her approach to the issue of feminine niceness too. In particular, Bramen frames Alcott as a woman whose unabated discontent with the rigidity of the social script dovetailed with an awareness that protest must be effected within the genteel parameters of amiability.

Finally, a brief turn to the African-American activist Ida B. Wells allows Bramen to consider the issue of feminine niceness within the context of racial protest. If Stowe and Alcott could lament their own middle-class disappointment without incurring charges of impropriety, Wells knew that ‘activism against racial injustice,’ explains Bramen, ‘required at times that one behave in a distinctly unladylike manner’ (242). As recounted in one of Bramen’s anecdotes, Wells protested with verbal and physical vehemence upon being ordered to leave a ‘whites only’ coach, tragically revealing that a negotiation between ‘niceness and outrage’ was necessary to oppose Jim Crow in the post-Reconstruction South (242).

Overall, Bramen usefully adopts the broad discourse of niceness for a sharp, trenchant and unerringly focused study of American mythologies, history and culture. Pairing a consideration of popular readings of generosity with new and exciting contributions to a study of amiability’s multiple permutations, Bramen’s precise and informed treatment of her source material coincides with a consistently engaging and compelling execution.

Sara Ruzza graduated from King's College London and is currently studying for an MSc in US Literature at the University of Edinburgh. Her research interests include nineteenth-century American women's writing, the work of Elizabeth Stoddard, queer studies and American literary regionalism.
View all posts by Sara Ruzza →
Tagged  C19, Cultural History, Literature, Native Americans, Race.
Bookmark the permalink.