Book Review: Cold War Anthropology: The CIA, the Pentagon, and the Growth of Dual Use Anthropology by David H. Price 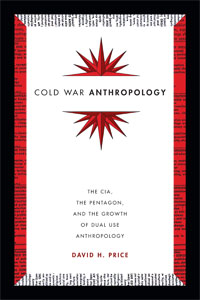 David H. Price’s Cold War Anthropology is gripping and unusual. The author has previously explored the significant role anthropology has played in military strategies in his 2008 book, Anthropological Intelligence: The Deployment and Neglect of American Anthropology in the Second World War. This latest offering delves deeper underneath the surface in order to analyse the global post-war moment, and as such examines a cardinally different political context. In so doing, Price combines fascinating case studies with a broader perspective, and suggests that the distinct difference between these two contexts often went unnoticed at the time: ‘From the present we can see distinct differences between America’s World War II fight against totalitarianism and Cold War America’s increasing support for neo-colonialism, but for many who had served in military or intelligence capacities during the war, the nation’s shifts in postwar political orientation was invisible’ (143). In this work, Price examines the role of academics in the new political climate.

Maintaining global influence was a new challenge for the United States after the end of the Second World War, notwithstanding the economic prosperity brought about by its newly-acquired global influence. Price in this book focuses less on the more familiar, and violent, episodes of the Cold War, such as the formation of military alliances and the US-Soviet arms race, and more on psychological battles for hearts and minds. In order to win the support of world populations newly emerging from colonial rule, and to prevent them from coming under Soviet influence, the US deployed its considerable cultural power, one aspect of which concerned anthropologists in the academic field.

The language Price employs throughout the book, with phrases like ‘capturing clients’, implies that the exploitation of academic research would be done in the service of new kind of cultural or commercial war. In this type of conflict, key players on the global stage were bankers and businessmen as well as politicians, and they had influence both in government and over academic research. ‘Rockefeller, Ford, Carnegie, and other private foundations bearing the names of Rooseveltian malefactors of great wealth,’ he argues, ‘shaped the funding of anthropological research during the Cold War’ (60). In fact, Price suggests that academic research was akin to a commodity available for sale, ‘militarised funding’ which played a dubious role in supporting seemingly neutral projects: ‘Given congressional claims of the 1950s that social science research was too biased or too liberal to receive federal funding, it is ironic that an increased flow of militarized funds for directed social science research would… invert this feared dynamic. These funds fed increasing liberal notions of militarizing social sciences, with a new generation of counter-insurgency projects that showed the Pentagon and intelligence agencies how easily they could buy a piece of anthropology’ (80).

As well as showing how particular research topics could be ‘bought’ for government purposes, Price demonstrates that such influence, backed by government funding, could also shape the future direction of the academic field. He devotes the entirety of Chapter 8 to the case study of MK-Ultra, a CIA-devised program designed to come up with efficient methods for interrogation, which drew on the work of academics. Price notes that the scholars who received these Human Ecology funds technically ‘did nothing wrong.’ They ‘undertook research designed to understand stress in an environment they had every reason to believe was striving to improve health and the understanding of stress’s role in disease; that hidden sponsors had other uses for this work was not their fault’ (220). However he nonetheless implies that academic research can be and indeed was manipulated to become a formidable weapon. ‘[Alan] Howard and [Robert A.] Scott intended for their stress research to add to a literature concerned with improving health, yet their research was selectively funded and reviewed by those who would use it for harm, not healing’ (220).

Price provides a number of case studies that demonstrate the ways in which academic research in other fields was weaponised during the Cold War. For example, Edward Lansdale, Graham Greene’s model for CIA agent Alden Pyle in The Quiet American ‘incorporated anthropological knowledge into his CIA counterinsurgency campaigns in the Philippines and Vietnam.’ In his memoir, In the Midst of War, Lansdale described using ‘local superstitions of vampires that roamed the jungles at night as a force multiplier when he trained operatives to kill insurgents and leave their bodies punctured with holes to suggest that vampires had drained their blood’ (301).

Rife with rich detail and featuring Fleming-esque figures of Louis Dupree (152) or Donald Wilber (157), Cold War Anthropology suggests a deep entanglement of academic knowledge with a brutal world in which two superpowers struggled to outdo each other on the global stage. The meaning of the word “interdisciplinary” takes on a new meaning here, yet the author’s position is clear: academic knowledge has the power to shape the ways in which historical events unfold.

I am an independent researcher, graduated from Queen Mary, University of London, and University of Oxford, and I am currently gathering materials for a prospective PhD thesis on moral relativism and perception of evil as a social construct in a comparative analysis of USA and Russia in the 19th century. My key interests include USA-Russian relations from the antebellum period to the present day, presidential philosophy, and the life and works of Herman Melville.
View all posts by Olga Ackroyd →
Tagged  C20, CIA, Cold War, Foreign Policy, Intelligence history, Politics.
Bookmark the permalink.